Many thanks to Ruth Smith for playing Quiet Snow on Simply Folk show, RTÉ Radio 1. It was a lovely surprise on Boxing Day! "enchanting sound of ..Eiks.. elevating the everyday and the mundane into something glistening with nostalgia" 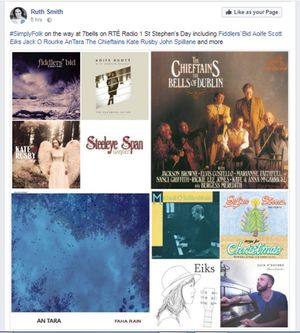 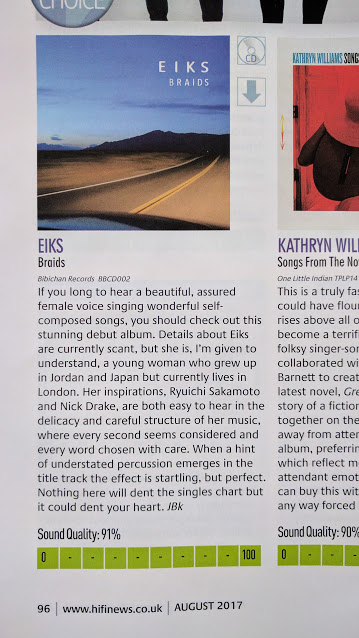 Really happy to be interviewed by Folk Radio UK on my songwriting:

Thank you Folk Radio UK for including 'Fallen Apples' in Transmission mix!

'Artist of the Month' Review on Folk Radio UK

So thrilled and excited to be 'Artist of the Month' on Folk Radio UK and here's an amazing review of my new album, 'Braids' by Sarah Belclaire:

"This is folk music, but it is not background music. Braids is the new album by Japanese-British artist Eiks (pronounced “Aches”), and it might land her on the long list of great folk fingerstyle guitarists. But, if Eiks sat side-by-side with others on that list, she would surely stand out. Far from your typical coffeehouse guitarist, Eiks blends jazzy folk melodies with unpredictable chord modulations and staggering lyrics. Embedded throughout Braids are the strikingly sophisticated embellishments of an innovator on the rise.

Eiks now calls London home, but spent her younger years in Jordan, and then in Japan. Her ability to deliver the unexpected is undoubtedly a product of her worldly exposure to music. In her formative days, her passion for music was piqued by the sounds of pianist and composer Ryuichi Sakamoto. She later became interested in popular folk and alternative artists, naming Nick Drake and Radiohead as two of her greatest influences. Her songwriting imagery, which borrows fondly from these musicians, is reliant upon her poetic grasp of the relationship between humanity and nature. Eiks portrays a woman inevitably linked to her surroundings. Each meaningful moment corresponds to an image from nature: Her former lover, “make[s] hay” in her heart while she reminisces about lying in the grass, “side-by-side like fallen apples.”

With these inspirations tucked away in the back of her mind, Eiks has crafted an album not only deserving of one’s full attention but difficult to savour without it. Braids is less “happy accident” and more “calculated creation.” Eiks fells folk music cliches, instead employing symbols of nature as necessary tools of her storytelling. What better way to depict the life of a girl continually uprooted? Her instrumentation also feeds into this use of earthly imagery. In “Fallen Apples” the jazz-style drums of Matt Snowden pump out a rhythm like fallen fruit hitting the ground. In “Away They Fly” arpeggio guitar notes float by like birds taking flight, one by one.

Eiks paints a nature-laced backdrop upon which to lay imaginative lyrics that have the precision and vibrancy of an evocative libretto. Short and somber—rather than short and sweet—her poetry is perhaps her most exceptional innovation. She envisions the tiny details of scenes of sorrow: “laying pennies on a pendulum,” or, “rays of sun piercing between sycamore trees.” Eiks’s ability to embellish the mundane is the greatest strength of her lyrics. The most banal task, like folding away one’s summer clothes at the beginning of autumn, becomes an expression of longing, loss, and fear of the cold (or lack of warmth in one’s life) in expertly crafted songs like “The Fall.” She sings these lyrics in a soft and humble soprano, with an unusual accent that brings to mind a travelling minstrel or troubadour.

From the cultures of her upbringing Eiks hones in on the greatest artists and creates music in tribute to those she admires. Braids is potentially the first album in which Miles Davis and Oscar Wilde might sit comfortably shoulder to shoulder. And, somehow, even with all these images and influences bumping up against each other, Braids is not distracting or heavy or chaotic. Eiks is an expert at handpicking her allusions, and she only employs those which contribute to her overall narrative. “Kind of Blue” is a nod to the Miles Davis album of the same name, a story told through climbing guitar notes that ring out in an old bar in Japan. “Tread Lightly” takes on a completely different time and place, a cemetery in late winter, where snow has begun melting over the grave of a young woman. This song borrows words from Oscar Wilde’s death prayer entitled “Requiescat.” Somehow, Eiks manages to bring to life Wilde’s dream in this song. A soft, meandering piano feels reminiscent of a late 19th-century piano bar. Layered vocal hums surge eerily forth as if from a Victorian churchyard where the poem’s subject might be buried. In Braids, Eiks masters the art of borrowing and does her heroes proud.

Though an expert of allusion, Eiks is plainly difficult to compare to other artists. At times she embodies the fingerstyle musings of Nick Drake, at others the atmospheric grace of Jeff Buckley. At her best, she is an amalgam of many styles, many places, and many of her own inventions. While “Bottled Dream” brings to mind a folkloric rhapsody, “Curtain Call” is more at home in a smoky folk club in 1974. Title track “Braids” ushers us into the dreamy mental state of a girl writing in her journal, and “Willow Tree” wakes us from that dream in the midst of a midnight storm. Eiks’s flawless melding of spaces and sounds is as surprising and alluring as Bert Jansch practising guitar in a room where Radiohead’s Kid A is playing softly in the background.

From track to track, she will continually surprise you. If melodies were paintings, Eiks would hang them upside down and discover that the view is better from another perspective. Braids takes you on a journey to all the places you never realised you wanted to visit simply because you didn’t know they were there. It is a walking tour through the countryside, through rooms well lived-in, and through experiences, we may never have thought to share before. It is an album of memory and homage, tooled and re-tooled like a worn keepsake, and Eiks is an inventive creator who relishes nostalgia and excels in the preservation of life’s tiniest moments."

'Away They Fly' Single Out Now

Really thrilled to have 'Away They Fly' played on Gideon Coe Show on BBC 6 Music! (on around 2h39) Thank you!

The Label of Love is Trailer, plus Gideon plays sessions from Stray Cats and others.

Review of Away They Fly by Gold Flake Paint

Here is a lovely review of Away They Fly by Trevor Elkin of Gold Flake Paint:

"They say we are a product of our unique experiences, so, what matters most is how we make sense of them. There is so much we don’t understand and can never probably know, but the point is it’s all about trying. New to us, Japanese-British DIY artist Eiks is no stranger to this endless quest, and its lessons are something which course through her work.

Shaped by an upbringing in Jordan, life in London, Japan and travelling the world, Eiks’ self-taught folk-touched music makes sharp observations about the world, rendering it both familiar and alien. From her debut album Braids, due in July, ‘Away They Fly’ is a tender welcome to Eiks’ profoundly dreamy world, stirred by her haunted vocals. The scene gently undulates, people and places shift in and out focus, while weeping strings and lightly picked guitars describe the only constant presence, of birds soaring above it all.

Close your eyes and fall into the simple, magical beauty of Eiks below."

My new single, 'Away They Fly', and review

I'll be releasing my first official single, 'Away They Fly' on 9th June 2017. Here's a lovely review of it:

"alas no sound links on this just yet, safe to say it’s something very special. a trailer single ‘away they fly’ has had us captivated and swooned in its ethereal web, it comes lifted from a debut full length looming on the horizon entitled ‘braids’ that’s due for adoring sometime early July. By Eiks, described in passing as a Japanese / English songwriter reared on the beautified craft of Ryuichi Sakamoto and much beguiled by the influence of Nick Drake and Radiohead, ‘away they fly’ is charmed in sprays of honey toned pastorals that weave and flicker throughout all the time opining and genuflecting to evoke a sense of a wood crafted wonderland daydreamed in mysterious enchantment, the vocals like willowy siren calls sigh to an airy folk psalm twinkled in noir toned string swathes, if its references you require then you couldn’t go far wrong than imagining a hazily twilight set picnic around whose feasting layout sat members of the Owl Service, Oddfellows Casino and Beautify Junkyards."